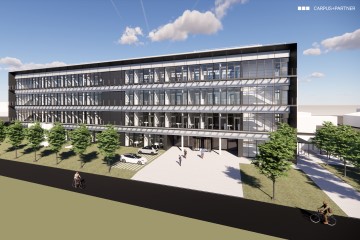 Milestone decision for basic research at the University of Duisburg-Essen (UDE): The Science Council has classified the planned ACTIVE SITES research building as worthy of funding. The project will thus be realised - subject to the final decision of the Joint Science Conference (GWK). The federal government and the state of North Rhine-Westphalia will each bear half of the costs for construction and equipment, which amount to 69 million Euros. With ACTIVE SITES, the UDE will have a centre of international acclaim at which so-called active sites will be researched.

The active site is the decisive point of a catalyst or protein where something new is created from one or more starting materials in a chemical reaction. Catalysts are essential for natural chemical and biological processes, but also play a key role in many technical areas from water purification to energy conversion. A better understanding can contribute to finding answers to currently pressing questions, such as how it is possible to remove CO2 from the atmosphere and convert it into energy sources. The goal is therefore not only to gain new insights into how exactly these ultrafast processes work, but also how they can be influenced.

Science Minister Isabel Pfeiffer-Poensgen says: "The Science Council's funding recommendation is impressive proof of the high scientific potential of the research building ACTIVES SITES. It will help to further strengthen the research into materials and substance development in the field of energy technology and biomedicine at the University of Duisburg-Essen. At the same time, the Research Alliance Ruhr formed by the three Ruhr universities will benefit from the new research building and thus increase the international visibility of the university and the entire Ruhr region as a major science hub."

In the new research building, scientists from different disciplines such as chemistry, physics, biology and engineering will work together. The concept of working across disciplines as well as across substances is the first of its kind. Rector Professor Barbara Albert emphasises: "This is an important step and a great success not only for the UDE. New methods can now be developed that use knowledge from different disciplines to explore large, overarching themes and questions." The Research Alliance Ruhr will also benefit from the new building: "In particular, the Research Centres 'One Health', 'Chemical Sciences and Sustainability' and 'Future Energy Materials and Systems' will be able to use the knowledge gained for their own research," Albert continues.

The scientists' approach is special: "We want to investigate actives sites in their natural environment during the chemical, biological and physical processes" says the chemical engineer and deputy spokesperson of ACTIVE SITES, Professor Corina Andronescu. "So far, active sites are mostly analysed either in artificial environments or only indirectly by comparing them before and after the reaction. But this is not enough to fully understand how they work."

The expectation is that the scientists from the different disciplines will benefit directly from each other: "We assume that a set of methods developed, for example, by a biologist in the analysis of a cell in a cell cluster can also be applied by an engineer in the analysis of a single particle in a mass of catalyst particles," Andronescu elaborates.

The new building will reflect the interdisciplinary approach. The plans call for many open work spaces and shared laboratories. These are intended to encourage exchange and can be flexibly adapted to the needs of different research groups. The building will have a total floor space of about 4,800 square metres and offers 125 workplaces. It is to be built on the site Am Thurmfeld, which is adjacent to the north of the existing campus in Essen. "I am particularly pleased that we are the sole developer and can realise this project on our own land," says Chancellor Jens Andreas Meinen. Construction is scheduled to begin in 2023, with the first researchers moving in in 2026.