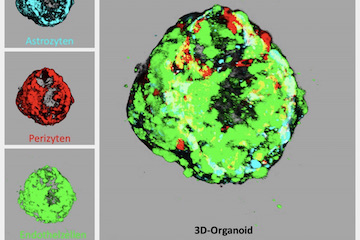 Confocal laser scanning microscopy images of 3D organoids after 120 h cultivation time. The core of organoids consists of astrocytes covered by pericytes and an outer layer of endothelial cells. The overlay image of all channels represents the whole organoid.
© UDE/AK Epple

When researching damage caused by strokes, there is no getting around them: mice. Their brains are used to simulate vascular occlusions and their consequences - until now: The future could belong to "mini-brains" from the laboratory. With them, a team of researchers from medicine and chemistry at the UDE wants to establish new methods in stroke research without animal testing. The German Federal Ministry of Education and Research (BMBF) is funding the recently launched project with 750,000 euros.

For the next three years, everything will revolve around 3D organoids in an in vitro process. The cell structures produced in the laboratory, which resemble organs and provide tissue for investigations, are not a new invention by the UDE researchers. "But we are applying this method to stroke research for the first time," says CENIDE member Prof. Dr. Matthias Epple from Inorganic Chemistry. Together with his colleague, Dr. Viktoriya Sokolova, and his colleagues from Essen University Hospital, biologist Prof. Bernd Giebel (Institute of Transfusion Medicine) and physician Prof. Dirk M. Hermann (Chair of Vascular Neurology, Dementia and Aging Research), Epple wants to optimize and validate the animal-free model. In this way, it should find its way into research as quickly as possible. "If we succeed, research will need up to 20,000 fewer mice per year," Hermann estimates. That's a good start, given that more than 200,000 mice are used for stroke research worldwide every year.

The three scientists and their teams have spent several years preparing the project, and they have already worked together on an interdisciplinary basis. Now it's time to get practical: the team cultivates three to six different cell types in the laboratory. The "mini-brains" will then be used to test which active ingredients pass the blood-brain barrier and what their effects are, including extracellular vesicles and ultra-small nanoparticles with different sizes and charges. "This drug discovery is an important step in the development of new drugs; it will help us develop a potential stroke therapy," Giebel explains.

The BMBF is deliberately pushing alternative methods research with its funding. If the UDE team is successful, there will not only be a publication at the end of the project, but also a workshop and a YouTube channel to raise awareness of the new approaches in stroke research without animals.