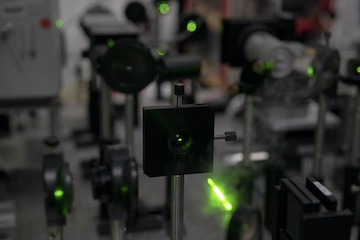 A research team led by the group of Dr. Marc Aßmann from the Faculty of Physics at TU Dortmund University has investigated the extraordinarily strong interactions of Rydberg excitons in copper oxide in a transnational collaboration with partners from the universities of Rostock, Aarhus and Harvard. In the process, the group discovered a blockade effect between excitons that, with a size of several micrometers, appear like giants in the quantum mechanical system. The controllability of such effects is highly relevant for optical circuits and quantum information processing. The results were recently published in the prestigious journal Nature Communications.

Excitons are hydrogen-like bound states of negatively charged electrons and positively charged electron vacancies - called holes - in a semiconductor. They play an important role in fields as diverse as organic solar cells, photosynthesis and semiconductor lasers. Analogous to hydrogen, excitons also have excited states. Excitons in highly excited states, the Rydberge excitons, exhibit astonishing properties that are all the stronger the higher the quantum number of the excited state: For example, the volume of the twentieth excited state of an exciton is already 64 million times larger than in the ground state, while the polarizability, i.e. the sensitivity to external electric fields, is even 1.2 billion times larger. These properties make Rydberge excitons very interesting for precision sensing.

Dr. Julian Heckötter investigated the interactions between several such Rydberge excitons in different states as part of his doctoral thesis, which was awarded the Wilhelm and Else Heraeus Dissertation Prize by the Dortmund Physics Faculty. To do this, he tailored two laser beams so that each beam produced a precisely defined Rydberge exciton state, and was thus able to precisely measure the interactions between the two states. In doing so, he was able to demonstrate a complex blocking effect. "We found that a sphere forms around each exciton in which no further excitons can be generated," says Dr. Marc Aßmann. "The excitons must maintain a certain minimum distance from each other, which can be several micrometers in size."

This also revealed a systematic asymmetry that depends on whether the effects are studied on a larger or a smaller exciton. Together with theorists Dr. Valentin Walther from Harvard, Prof. Thomas Pohl from Aarhus and Prof. Stefan Scheel from Rostock, this phenomenon could be elucidated. Detailed computer simulations showed that the cause lies in Van der Waals interactions. These are the same forces that are mainly responsible for geckos being able to walk along walls and ceilings.

The results of the interdisciplinary research team were recently published in the renowned journal Nature Communications. The project was funded in part by the joint German-Russian Collaborative Research Center TRR 160, which involves research institutions in Dortmund and St. Petersburg.